The Heart of Wales Line 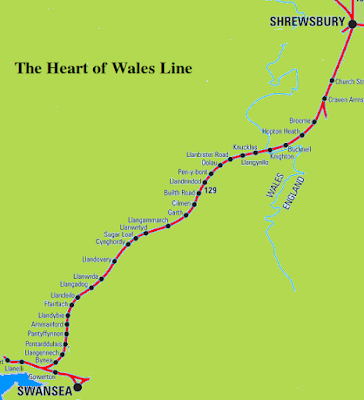 So I was up early on what was already a warm morning and forecast to be a hot day in time to check out of the hotel and find some breakfast before going to Swansea station ready to catch the 0934 departure for Shrewsbury. I was on an Advance Standard Single so trading cost against flexibility, which meant valid only on this train and no hopping on and off at intermediate stations alas. 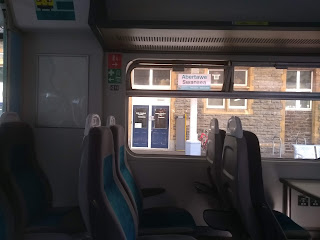 If travelling from the Swansea end you'll want to get a seat by the window and facing "the wrong way" as the train reverses at Llanelli so you'll be facing "the right way" for the most scenic part of the trip.

There were quite a few other passengers aboard when we left Swansea and a lot more joined at Llanelli so bagging a decent seat was a must. Given the forecast temperatures I went for what I hoped would be the more shaded side of the train too - starboard to start which became port after the train reversed at Llanelli. Also took plenty of drinking water, this isn't a service run with modern air-conditioned rolling stock - our train was a two car Class 150 Sprinter. It did have free WiFi though, however this resolutely refuse to allocate me an IP address and eventually gave up the ghost altogether. It may have been due to the heat but the train electrical system did appear to be quite unwell resulting in no interior lights (cue ghost train screams in the tunnel sections) and a khazi door with a mind of its own 🙄 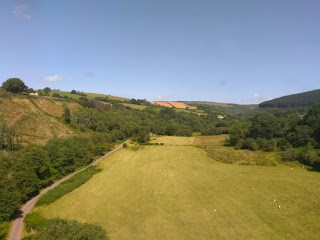 Anyway, the scenery, yes it's worth the trip.

Sugar Loaf Station. Sadly no one requested to stop at this most remote of stations and I was distracted so didn't manage to get a picture ☹️

This one is taken from the top of Cynghordy Viaduct though, which is quite a view. 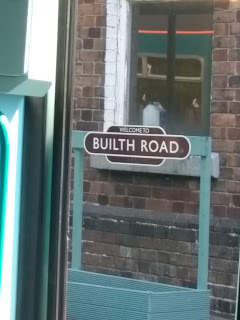 At Builth Road there was quite an exodus of passengers and from there on we gained and lost quite a few as locals as well as tourists make use of this line.

The scenery continued to be worth the trip.

We gained a couple of well laden cyclists for a while who were so keen they almost got off one stop before they were supposed to (too many stations with names beginning Llan ?) and then stood by the door for the next several miles. 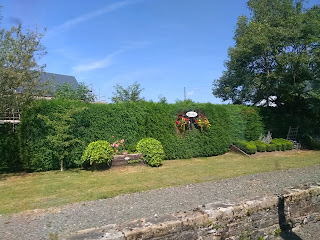 Most of the stations, even the smaller ones, appeared to be well looked after especially those under the care of community groups.

Between Knucklas and Knighton we crossed the border into England and lost the "Llans" and the terrain became more rolling than hilly. 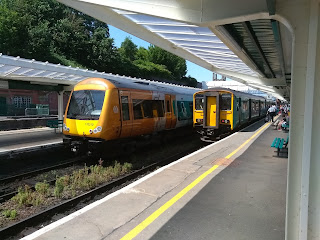 Around Craven Arms there were more industrial buildings and eventually we crossed the River Severn into Shrewsbury Station.

My word it was hot in Shrewsbury town centre!


The Heart of Wales is definitely one to tick off the scenic railway must do list and will quite possibly get a revisit at some point, hopefully with some more time available to explore.

More photos from the Heart of Wales (and a bit of England too): 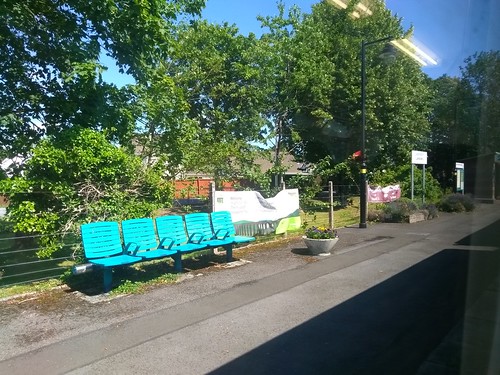 Posted by snaprails at 13:55 No comments:

I needed to get to Swansea as the starting point for a trip on the Heart of Wales line. Checking for tickets on GWR's website I noticed that an Advance 1st Class single could be had for only a handful 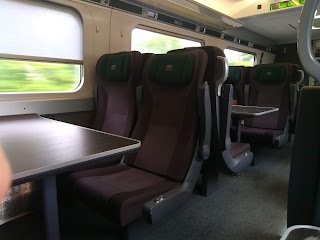 of pounds more than an Anytime Standard Single. So the lure of a comfortable seat and sufficient legroom proved irresistible and besides which you get fed and watered in 1st Class. Which means the price differential is even less by the time you've had lunch and a couple of cups of tea. Given that there were only 2 other passengers in my section of the carriage I assume that the bargain fares are GWR's attempt to fill some seats that would otherwise remain empty. Worth checking when booking anyway.
It would prove to be by far the most comfortable and pleasant journey of a 3 leg trip over the next 4 days. 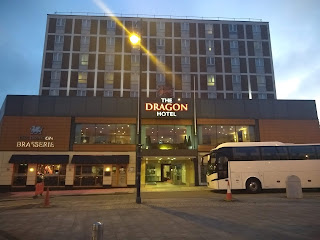 A late booking netted a good deal at the 4* Dragon Hotel a short walk from the railway station and convenient for the bright lights of Swansea city centre.

Nice to have an air conditioned room which was quite big although with only a view of the backs of neighbouring buildings. I've noticed that as a solo traveller you rarely get allocated a room with a decent view.

The city centre did seem to be one big building site mind you, which made it difficult for someone from off to get their bearings.

An early evening explore revealed Swansea to have the usual complement of chain bars and restaurants so I settled on Turtle Bay more or less at random, which turned out to be a good choice. I very much enjoyed the curried goat and the waitress reminded me of a girl from Llansamlet that I knew back in the early 1980s. Maybe she was related, I wasn't going to ask. 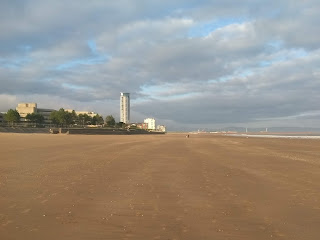 Post-prandial wandering took me via the marina  to the huge expanse of Swansea beach, along which I walked from end to end in the warm evening. It wasn't busy, a few walkers and joggers mostly. It stayed dry too in spite of the gathering clouds.

Swansea is an interesting place which will probably be worth a longer visit at some point rather than just a Monday night stop-over.

I retired to The Three Lamps, a "new multi floor venue in the heart of Swansea" of which only the ground floor bar was actually open, and sampled a pint of their own beer from the on-site micro-brewery, which wasn't bad at all. From a seat by the open front of the bar I was able to watch the world go by for a while, which inevitably included the various dodgy characters who gathered in Castle Square outside. Then back to the hotel for an earlyish night as I had to be up in the morning to catch the 0934 to Shrewsbury. 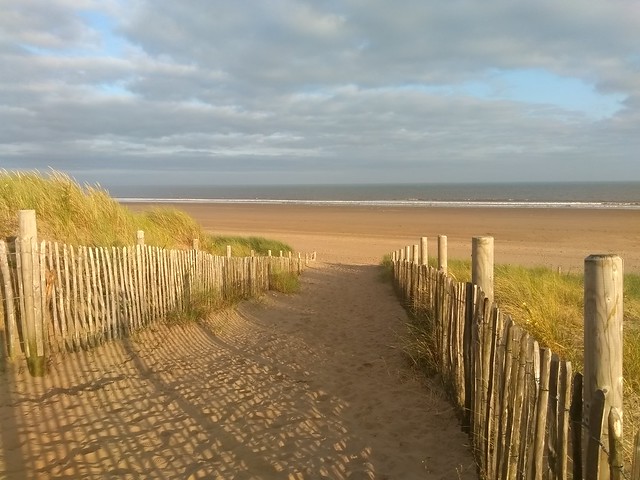 Posted by snaprails at 22:14 No comments:

A day out in the Surrey countryside, taking in the county's quietest railway station, a church used in a big hit film, and a pub lunch. 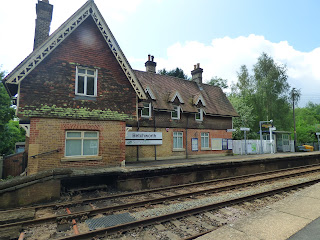 According to the Office of Road and Rail statistics for 2017-2018 Betchworth Station is now the least used in Surrey, taking over bottom spot from the once isolated Longcross.

There were  just 14,972 entries and exits, which if we assume is passengers making return journeys equates to about 20 people a day using the station. This could partly be explained by the fact that the station isn't in the village but a 20 minute walk away along a route that couldn't be described as pedestrian friendly - including having to cross the busy A25 Dorking to Reigate road. To reach either of those places, or even Guildford, most people are going to drive. 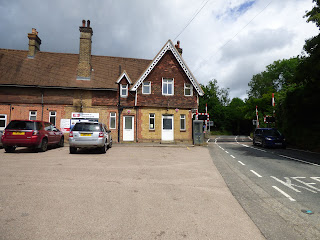 The station building is now in private hands and when I was there the interior was being redecorated. The ground floor now being converted to offices along with four car parking spaces, further reducing the likelihood of Betchworth gaining any commuters. 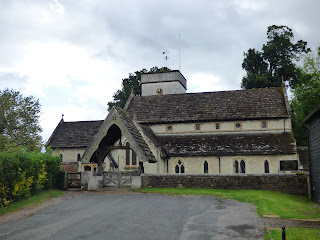 If you do take the walk to Betchworth you'll find a quintessentially English village scene which is probably a good reason it was chosen as a filming location for Four Weddings And A Funeral. St. Michael's Church was the location for Wedding No. 1, Angus and Laura, supposedly at ‘St John’s Church, Stoke Clandon, Somerset’.
At least it was a bit closer to the reception, which was filmed at a house in Hertfordshire 😀 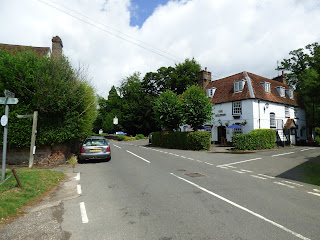 Of more immediate and practical importance you'll also find near the church the Dolphin pub.

Early on a Saturday lunchtime this provided a couple of pints of decent ale and a sausage sandwich of the type usually referred to as a "doorstep". Both were very welcome.

Rather than return directly to the station via the "main" road I took a more scenic and longer route leaving the village via a bridleway the other side of the church and through arable fields, once again having to cross the A25, and then climbing up to cross the railway and join the North Downs Way long distance footpath. 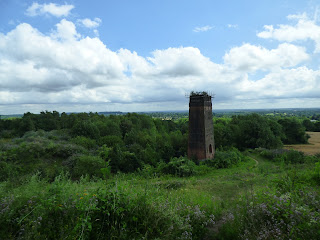 Following this path East towards Station Road I saw this strange brick tower standing on its own amongst the trees.

Despite looking like a spare support for a viaduct it is in fact a 110 foot tall  lime kiln. Though the area north of the station looks a picture of rural tranquility now it was once the site of a substantial lime quarrying and processing works, with a connection to the railway just west of the station. It also 3 other railways within the site, all of different gauges. The only obvious clue now to the casual wanderer that there was such industrial activity here is that the road leading out to Station Rd north of Betchworth Station is called "The Quarry".

And so I arrived back at the station to catch one of the two-hourly stopping services back home.

And it didn't even rain, even though it was forecast. Win!
Posted by snaprails at 12:42 No comments: