Took an afternoon stroll to see the oldest living thing around here , The Ankerwycke Yew. Standing on the opposite side of the River Thames from the popular Runnymede memorials to Magna Carta and JFK this ancient tree has been witness to centuries of history.
The tree is at least 1400 years old and could be as much as 2500 years old. That's extraordinary. It was here when Magna Carta was being "signed" across on the other bank of the Thames. Or maybe closer according to some arguments which say the signing was done on the Ankerwycke side of the river. It is also said to be the location where Henry VIII met Anne Boleyn in the 1530s. Though I'm not sure who says it, lots of things seem to get attached to the "history" of Henry VIII and Anne Boleyn, especially if it attracts visitors. That said Ankerwycke is much less busy than Runnymede which is just as well as the parking area, in Magna Carta Lane, Wraysbury, is very small. From there a permitted path leads through fields to the Ankerwycke Yew and the ruins of St. Mary's Priory. Today following this summer's prolonged dry spell the ground was firm, dry and dusty although on a previous visit it was quite muddy and thanks to the presence that time of a herd of cattle, not just muddy. There's a sign at the gate where the path starts but after that it's not well signposted. Keep the hedgerow to your left through two fields until you get to a broad path lined with mature trees. Turn right and follow this avenue which will take you to the yew and priory.

The tree is hard to miss having a girth of 26 feet (8m) but just in case you're unsure it's the one with a semi-circle of wooden bench seats around it.

The main trunk is riven with splits and almost hollowed out and the branches hang down almost to the ground on all sides. If you stand underneath it's nicely shaded - which was welcome today with the temperature in the high twenties celsius - and the thing has... presence,  particularly if there's no one else about. Not exactly spooky but you can sort of sense the weight of history. Despite the over-flying jet airliners departing Heathrow Airport it feels rather peaceful and between the jets at least it's hard to believe that you are so close to London. Close to the yew tree are the ruins of St. Mary's Priory, small and fenced off alas but the path runs right alongside so you can see it close up. You can also just see the ruins from the other side of the river at Runnymede.
On the subject of St. Mary's Priory the Source Of All Knowledge (a.k.a. Wikipedia) says:

Ankerwycke Priory was a priory of Benedictine nuns in Buckinghamshire, England. It was established around 1160 and dissolved in 1536.

The priory is in the care of the National Trust whose website says:

These crumbling walls were once a nunnery, built during the reign of Henry II and dedicated to St. Mary Magdalene. Following the dissolution of the monasteries the priory passed into private hands, and was patched up many times over the years. During the 19th and 20th centuries much of the surviving building fell into disrepair, and today only a few overgrown walls remain.

There is a lot more information about Magna Carta and Ankerwycke on the wraysbury.net site including evidence that Ankerwycke, then a small island belonging to the nunnery, might have been the actual site where King John and his barons met to sign Magna Carta rather than the flat marshy meadow at Runnymede where the barons were camped.

There are more photos of the Ankerwycke Yew and St. Mary's Priory on my Flickr feed.
Posted by snaprails at 20:58 No comments:

Behind the hoardings at Whitechapel Elizabeth Line Station

Got a sneak preview of the new Crossrail Elizabeth Line station at Whitechapel this morning. Well not so much sneak actually as Crossrail are quite keen for people to come and see what's going on as part of their "Engineering - take a closer look" Open Days programme.

The station is still very much a construction site and for the event there were plenty of barriers and plenty of staff on hand to guide visitors around and to answer questions about the station and the new railway generally.

The roof of the ticket hall is a "green roof" topped with sedum plants which gives benefits for biodiversity, conservation, and noise reduction.

The escalators are still being installed, they're in but not finished so no step-free access yet. Instead visitors had to take the 164 steps (according to the information supplied with the invitation ticket) down to platform level. I didn't count them but it did feel like it on the way back up! 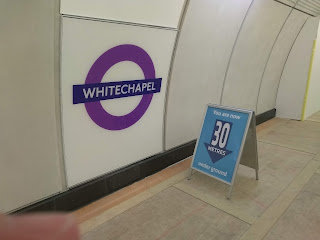 It's the equivalent of a fifteen storey building. (That's an "in joke" the explanation for which can be found here. 😉
Once at platform level visitors were able to explore and take photos and ask questions. Parts of two of the platforms were open, one a little more finished than the other, also the cross passages, and the bottom "landing" area of the three escalators. 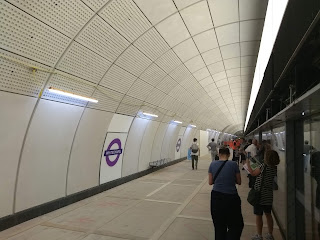 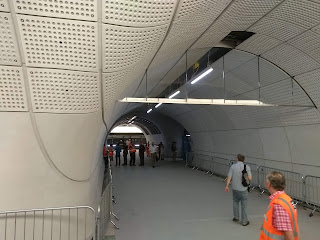 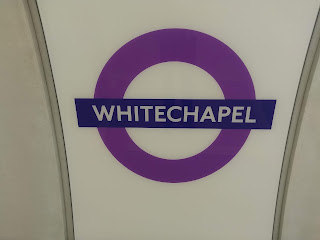 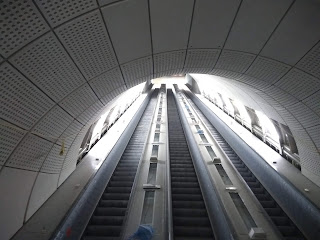 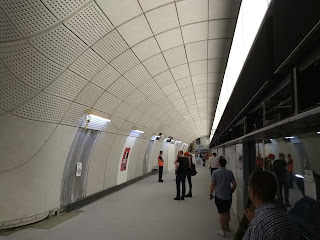 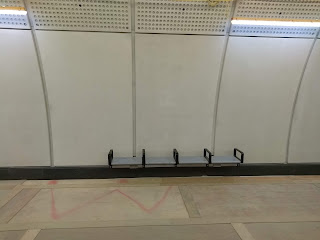 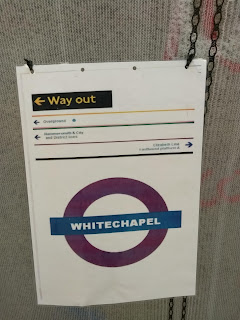 Notice showing how platform signage will be laid out. 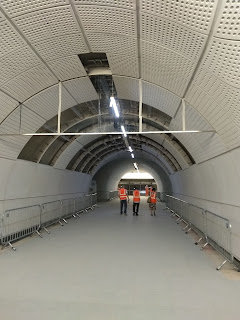 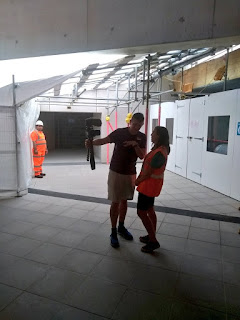 As I was coming out transport video blogger Geoff Marshal was going in so for a much better look at the station than I can give you I suggest you check out his Youtube Channel where the video he was making today is now online.

If you're interested in railways, Crossrail, or engineering generally check out the Crossrail Events page where you can sign up to get advance notice of events like the one today.

They even gave away freebies 😀

Posted by snaprails at 20:57 No comments:

I've always liked Oban. A compact town wrapped around its harbour and ferry terminal, ideal for wandering around with plenty of interest and no shortage of places to eat and drink. The West Highland Line is probably one of the best ways to get there, I driven there in the past but if you're driving you don't really get to appreciate the scenery - at least not without risk of becoming part of it. Also you can take advantage of the above mentioned places to drink :-)

Just over £30 (June 2018) gets you an off-peak return from Glasgow, in my case from Charing Cross changing at Dalmuir from the suburban service to the West Highland Line train that had come from Glasgow Queen Street. I was surprised that it was only a two coach train, quite busy but I had a seat reservation anyway.

The West Highland Line is famous for spectacular views but it quickly became apparent that we weren't to be afforded any of them by the rain and mist that had descended on the west of Scotland that morning. The photo isn't mine but gives you an idea of what it was like except the mist was thicker.

Fortunately by the time the train reached Oban two and three-quarter hours later the weather had cleared up and though breezy there were some prolonged warm sunny periods and it stayed dry.

The railway station is right next to the harbour and ferry terminal where Calmac ferries leave for the Western Isles so it's a very short walk and you're right in the town centre and harbour area.

Had a wander about the town, there were a number of tall ships (sailing ships) moored in the harbour at the North Pier. The North Pier has been redeveloped since I first visited and now seems to be dominated by two modern restaurants. I seem to recall there used to be a "Ripley's Believe It Or Not" and a Model Railway exhibition at one time but not any more. There are at least some public toilets which as far as I can tell are the only ones in the town centre.

Above the town and visible from most of it is what appears to be a Roman Amphitheatre. Now we all know that the empire's "civilising" influence didn't reach this far north so what is it really?

McCaig's Tower is a folly that stands on Battery Hill and is worth the steep climb from the town for the extensive views over Oban, the harbour and the Isle of Kerrera. Commisioned by wealthy philanthropist and banker (you don't get many of those) John Stuart McCaig to provide  a monument to his family and to provide work for local stonemasons. Only the outer structure was completed between 1897 and 1902 when McCaig died of a heart attack. I don't know if that was because he got the bill for the construction - £5000 (getting on for £5m today depending on how you measure it). 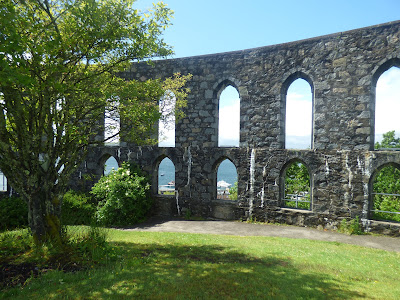 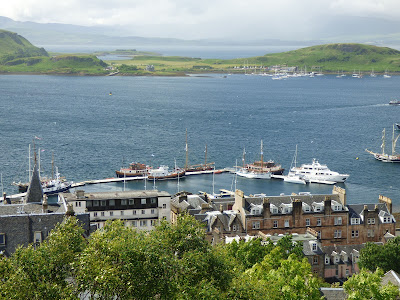 View to Kerrera from McCaig's Tower 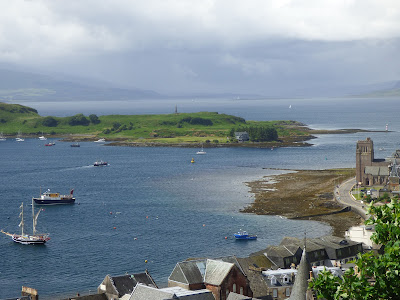 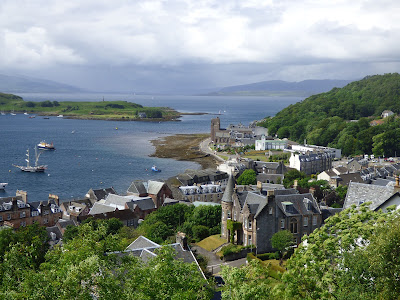 View over Oban towards Lismore from McCaig's Tower


In spite of the stiff breeze it was warm work climbing up to the tower and back so back into town for an ice cream and a look around the shops, a pint in the Oban Inn, some excellent grilled scallops at MacGillivrays Seafood right by the harbour, and to take some more photos. 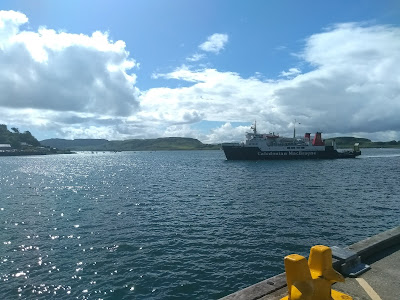 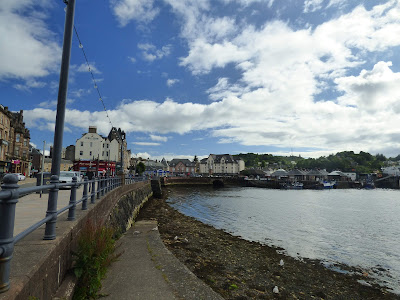 Oban, along the prom. 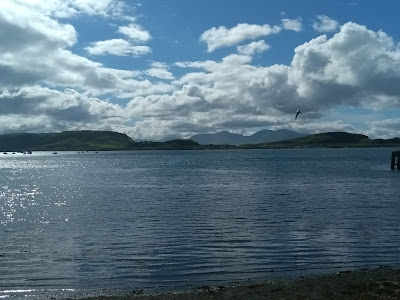 All the way to the Isle of Mull 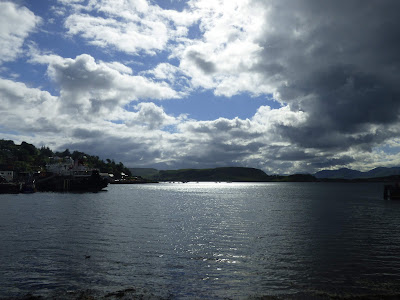 Clouds building but they passed without dropping anything on Oban. 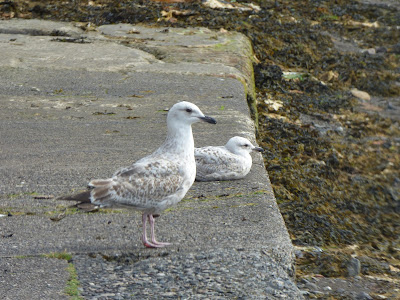 As is the gull.

And then it was time to get the train back to Glasgow. My seat reservation was in Coach G, which was a bit odd for a two coach train but the two coaches were F and G, something to do I think with how the trains out of Glasgow divide at Crianlarich, with part of the train going to Oban and the other going to Mallaig (which is a trip I intend to do at some point in the future). The views were much better on the way back in the evening light although photo's taken through the train windows don't really do them justice. 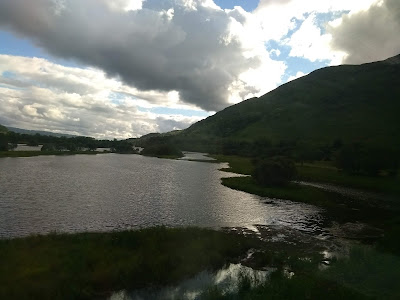 Loch Awe from the train. 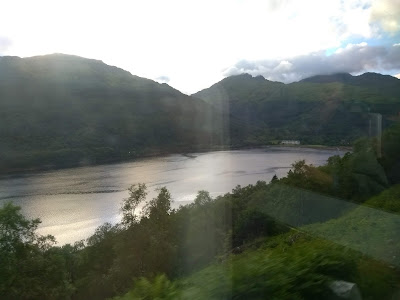 Loch Long from the train. 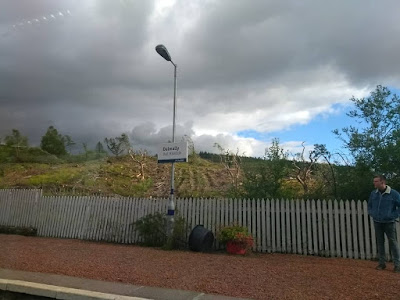 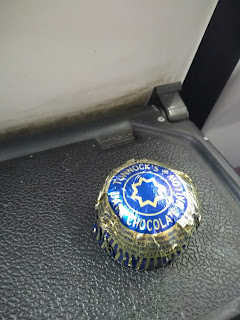 Back at Dalmuir Station to change trains and the setting sun lit up the adjacent tower blocks while waiting for the Scotrail suburban service for Charing Cross. 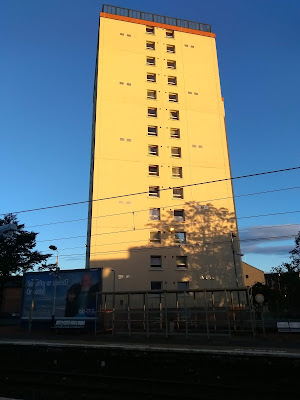 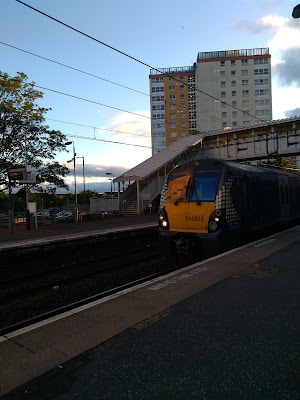 The Scotrail services in and around Glasgow were, at least while I was there, reasonably reliable, fairly frequent, and sometimes even on time.

If you're thinking of visiting Oban then I'd say do it. And let the train take the strain, as they used to say.