The London Transport Museum's Hidden London programme has now added Piccadilly Circus station to its list of behind-the-scenes tours. Having previously visited Euston and Aldwych I signed up as soon as tickets went on sale for another 75 minutes exploring disused holes in the ground. 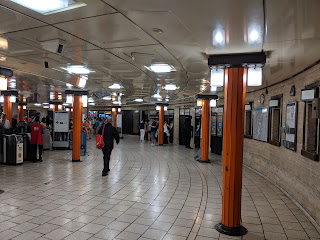 My plan to arrive in good time 30 minutes before the tour start was scuppered by signal failure on the Bakerloo, necessitating a more circuitous route from Paddington. Which meant I was five minutes late and only just in time to join the party in the main ticket hall of the "new", 1929 station. There we had a briefing on the construction of the new station and ticket hall directly under Piccadilly Circus and the statue of Anteros above, all of which is supported by the steel roof and supporting columns of the station below. This huge project took 5 years to complete and was London's "flagship" Underground station, decorated in Art Deco style using the best materials as befitted the "Hub of the Empire". Some of that decoration remains despite the 1984 makeover of the station. 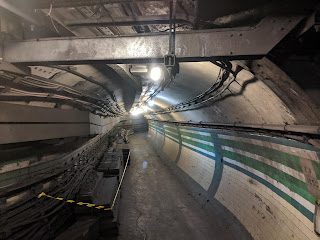 Then it was down the long spiral staircase (the equivalent of a 15 storey building 😉 ) to the disused tunnels of the earlier 1906 station.
Disused that is from a passenger point of view but carrying many cables and other services and used for storing engineering kit.
There's a lot of unique original glazed tiling still extant on the tunnel walls beneath the grime of decades and modern services clutter. Our guides gave a good presentation on the development of the original station. 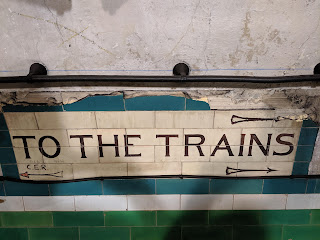 As with the other central London Underground stations Piccadilly was used as a public shelter during the Blitz, albeit initially against the wishes of London Transport and much of the rest of the tour focused on this aspect of the station's history. As it wasn't a purpose built shelter conditions were not good and eventually consideration had to be given to the toilet requirements of several hundred shelterers and how to then remove the resulting matter from the station deep underground - it doesn't flow uphill after all. 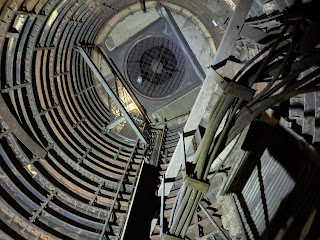 In the old station stairwell an ejection system using compressed air was installed, some of the supporting structure is still evident at the bottom of the shaft.

As well as London's theatre-goers the station was also used to secretly store safely 150 works of art from the Tate collection and London Museum. these had previously been at Dover Street station (Green Park) but London transport wanted the space there for it's own wartime operations centre. 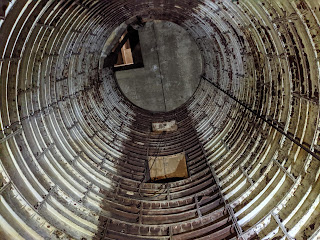 Where the new station has two levels of escalators to get from ticket hall to platform the old station had eight lifts and we were able to look up into the huge lift shafts from the lift lobby near platform level. 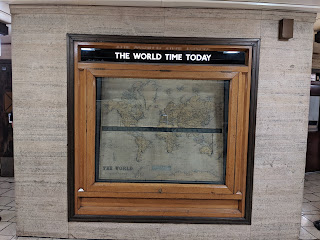 noticing such as the World Time clock and original exit direction signs.

As usual another very interesting Hidden London tour and a chance to see places from which the public are usually excluded.

For more dates at Piccadilly and other venues check the Hidden London pages at the London Transport Museum website.
Posted by snaprails at 00:01