Revealed: What 200 people were doing in a field in Crayford on a Sunday afternoon.

So now the embargo has been lifted on this I can talk about what happened on the first Sunday in August. At the beginning of july I got an invite from Geoff Marshall of All The Stations fame to take part in something slightly silly and railway/tube related along with a couple of hundred other like-minded idiots enthusiastic people. 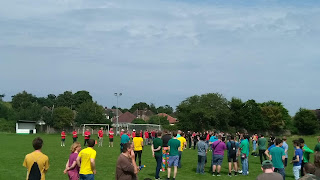 How would you like to come to Crayford wearing a tee shirt the colour of a London Underground line and stand about for an hour?

The idea was to create a human version of the "Tube Map" - or at least the Zone 1 section of it because we're not that mad - and then video the result to be published on Youtube. Previously All The Stations had done something similar, the BR Double Arrow symbol. That only needed 100 people to be herded into place, the tube map would need at least double that (we'd hoped for 300). 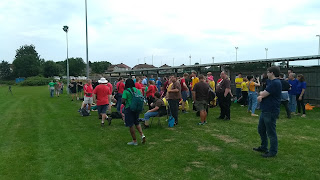 One thing became apparent, getting enough people with enough of the right coloured tee-shirts wasn't going to be simple.

Hammersmith & City (pink) was always going to be a problem.

Everyone has a black tee-shirt so Northern Line definitely wasn't going to be a problem.
I chose Piccadilly (dark blue) because I was born near what at the time was the western end of it. Having decided on Saturday that my intended shirt had in fact faded to something nearer the Victoria line I went cheap tee shopping (Decathlon £1.99 as it happens) and as at that point there were plenty of Piccadilly and not enough District looked for a suitable green tee as well. It seems the clothing industry only now knows two versions of green, fluorescent lime or khaki, nether of which are close to the required shade. 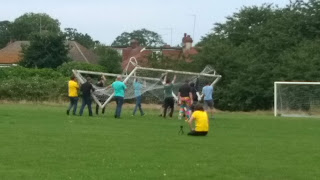 The event was held on the pitch at VCD Athletic / Oakwood Training Ground, Crayford. It wasn't hard to find, followed the trail of coloured tee-shirts from the station.
Once the goalposts had been moved out of the way and some group photos taken by the talented Luke Agbaimoni all that was needed was to arrange 200 people into a semblance of Zone 1 of the tube map. It took a while, with a few tweaks and rearrangements and checking from above by drone. Eventually we were ready for the actual filming. This was all done from Geoff's drone which he assured us had never fallen from the sky yet so we would be perfectly safe 😀 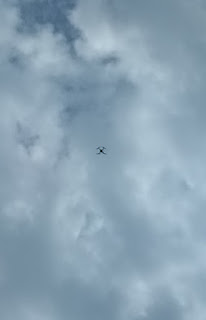 So what was the point of all this then?

Does there have to be a point? A lot of people, most of them having some interest in railways and or the Underground got together and did something essentially a bit daft and chatted, socialized (the football club bar was open and it was a hot day), and met people who they might only have known online or have met before only briefly. Not all "social media" activity is carried out through a screen.

Nobody fell over backwards Falklands penguin style following the drone as it flew over (and no one got that reference when I mentioned it at the time).

At no point did I hear anyone shout out "Mornington Crescent!", though it was a big field and I'd be amazed if nobody thought of it.

Everyone who was there seems to have enjoyed the experience and in these uncertain times that's not something to be passed over lightly.

That's now live on Geoffs channel, go and watch it and "think yourselves accurs'd you were not there, And hold your manhoods cheap whiles any speaks that stood with us upon Human Tube Map day." 😜