The lights, the lights! 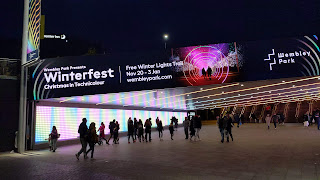 It is that time of year again. You can barely move it the supermarkets for piles of tat that no one needs to buy (the war against single-use plastic seems to have been temporarily suspended) and the shelves are full of festive fayre much of which will have passed its use by date before the big day.

On the plus side however it's also the time of year that the lights go on. Town centres - or their modern replacement, Shopping Centres - across the land put up their best seasonal illuminations in an effort to draw as many spenders as possible in competition with other local towns. So far, so standard.

As well as your usual Christmas Lights from Bromyard to Oxford Street there are more ambitious, or maybe more artistic displays. Canary Wharf has "spectacular light installations and interactive art"  but you'll have to wait until January to see that. In the meantime you can already see some spectacular light installations and interactive art by heading up the Metropolitan or Jubilee lines to Wembley Park. (Other transport choices are available if not coming from central London.) 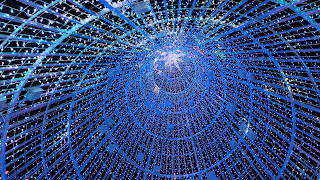 For here near the home of English football (that will probably be disputed by those in the north) and the London Designer Outlet, is Winterfest 2019. Or Christmas in technicolour as it says on their website. The website also says that you can, "Experience Wembley Park’s first-ever immersive winter lights trail. Artists from all over the world have curated light and sound artworks that will transform Wembley Park into an immersive playground of unique art installations, combining light, sound and touch into a truly multi-sensory experience. From the acclaimed Sonic Runway, making its European debut in Wembley Park via Nevada’s Burning Man festival, to London’s tallest-ever LED light Christmas Tree, get ready to be enveloped by a technicolour trail of lights and interactive sounds."

And that's a pretty good description, as I discovered on a Sunday evening with nothing better to do. Here's a flavour (with cheesy music but no sleigh bells I promise) of what I found:

Winterfest is on until January 3rd so they'll be hoping you'll come and see it and spend money on Christmas presents and in the Boxing day sales. Or you could just go and see the lights - there is no admission charge. I succumbed to the lure of a Pret filter coffee as it was a chilly night so I suppose they acheived their aim of attracting more trade to the tune of £1 😀

Season's Greetings.
Posted by snaprails at 11:27