Foragers of the Foreshore

Foragers of the Foreshore 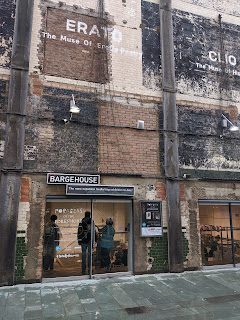 From the website: "Foragers of the Foreshore is the most expansive exhibition on Mudlarking that has ever taken place; it unearths the history of London through items recovered from the Thames. Discover the weird and wonderful world of mudlarking, from its origins in the Victorian era, to its popularity today. Meet the mudlarkers who have dedicated themselves to finding London’s lost treasures, and marvel at the fascinating collections that have shaped their lives."

Bargehouse is easy to find, just walk along the South Bank until you get to the Oxo Tower and it's the (deliberately I suspect) scruffy looking building just behind the river front building with all the fancy galleries in. It's a multi-storey space which inside feels a bit like a building site has been taken over as a temporary art gallery, which it is in a sense as it is used as an event space rather than a permanent home for a collection. 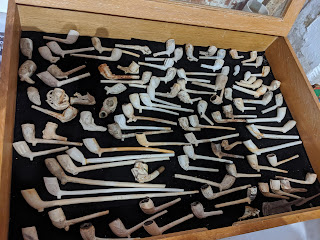 Mudlarking in it's modern sense, as opposed to in the 19th century when it was an occupation of the most poverty stricken, involves searching the Thames foreshore for historical artefacts or anything else of interest that the receding tide exposes. People have been dropping or chucking things in the river for centuries making this one of the largest archaeological sites there is. So everything from pottery and glass, through metal buttons, coins, and wartime ordnance, to modern plastic objects and messages in bottles comes out of the thick anaerobic Thames mud. Also clay tobacco pipes. Lots of them!

Before you go rushing off with a bucket and spade though note that there are strict rules about where you can search and you need a permit from the Port of London Authority Also the Thames has a huge tidal range. This will kill you if you don't take tide times into account. 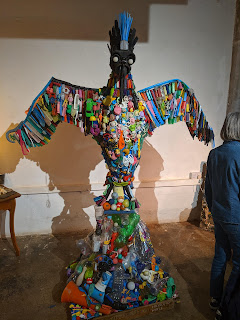 This exhibition isn't just about the objects that come out of the river though, it's also about the mudlarkers themselves, how they got into mudlarking, and what they do with what they find. In many cases they create art.

One of those artists is Nicola White  who had recreated her workshop at Bargehouse as "Mudlark In Residence".  A space crammed with all sorts of finds (that's a selection of her clay pipes above) both ancient and modern and examples of her artworks. Dominating the space was a huge sinister-looking bird made from discarded plastic items retrieved from the river.

I've followed Nicola's muddy adventures for a long time on her YouTube Channel so this was a chance to be a massive fan boy and chat to her in person.

Elsewhere in the building there were many more displays of artefacts, art pieces and audio and video installations and Hannah Smiles portraits of mudlarkers. There were experts on hand to give advice and to help identify your own found objects and though it wasn't in use while I was there a "virtual mudlarking experience". 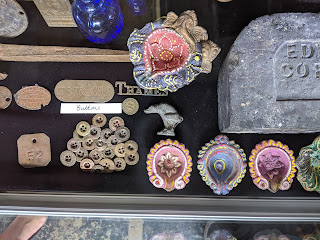 I recommend getting down to Bargehouse before Foragers of the Foreshore ends on Sunday if you can. I found when I emerged (from the building not the mud) that over two hours had passed, usually I get itchy feet in art galleries before then. I also came out wishing I lived a bit nearer the tidal Thames as well.

While you're there find the display case in this picture and see if you think that's what I think it is, which amused me rather more than it really should 😄
Posted by snaprails at 11:46