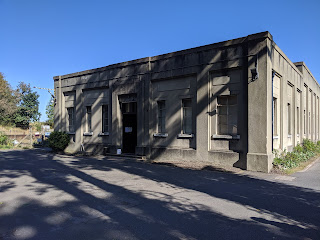 Between two houses in a suburban street in Woking, Surrey behind a metal gate is a low Art Deco building. Normally off-limits to the public except for two weekends in September (so you've missed it this year) this is the British Railways Electrical Control Room.

The Woking Electrical Control Room was built in 1936 as a control centre for the electrification of the Southern Railways lines, the room was taken out of operational use in 1997, although parts of the building remain occupied.

The building has many art deco features both outside and inside, and retains many original fittings including three copper and iron uplighters, track diagrams with working lights and switches, and the original control desk.

The building is Grade II listed so has escaped the usual fate of redundant railway buildings. 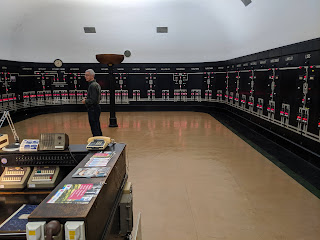 Inside you first see the backs of the track diagram panels, complete with exposed electrical  wiring and Do Not Touch signs, in the outer corridor. Passing through a double door you enter the control room proper which is is much the same state as it was when retired in 1997.

It's an impressive space. The high domed ceiling means that a person speaking normally at one end of the room can be clearly heard at the other (making it quite noisy with a group of visitors split into two tour groups).

The tours are conducted by retired BR power engineers so they know about the building, its 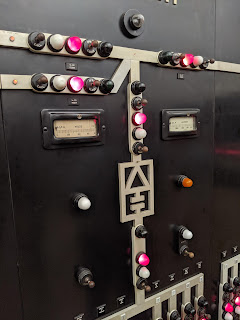 history, and how it all works. They explained clearly how power for the trains and signalling was distributed, how it could be switched on or off, and how the control system could be used to locate faults. Obviously they also have a stock of interesting and amusing anecdotes from their time working on the network.

The track diagram and some other control equipment is powered up for demonstration purposes too which is much better than just a static display. Flashing lights and things that go round are always good 😃

Also on the control desk were some old log books including that covering the great storm of 1987  when trees blown onto the line and onto the line side power equipment kept the control room operators and engineers very busy indeed.

Once the tour was done there was no hurry to move visitors out, it wasn't very busy and I understand visitor numbers per day over the two weekends were in dozens rather than hundreds.

That meant there was plenty of time to talk with the volunteer guides and I had a long and wide-ranging discussion covering the similarities and differences between the world of railway electrical supply and that of public telecommunications, amongst other things.
I really enjoyed this visit and if you can get to Woking next year when it's open again it's definitely worth it whether you're interested in architecture, railways, or engineering. Or even if you're just curious - it doesn't cost anything to go in and you don't need to book ahead. 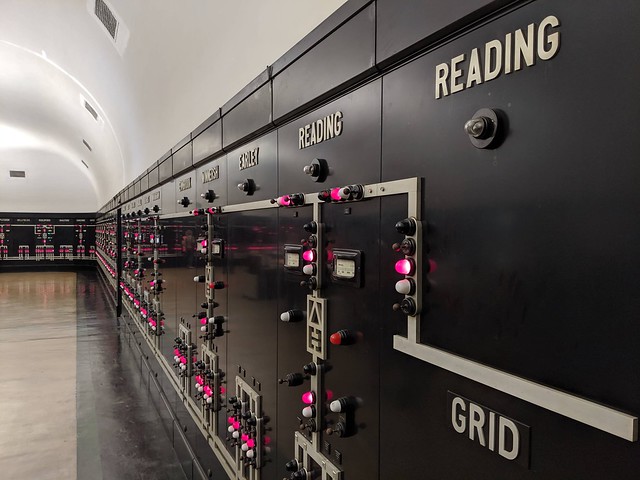