I took a drive around the M25 to Bexley on Sunday, not the nicest road trip but rail replacement buses made going by train a bit impractical on this occasion, to visit the Victorian sewage pumping station at Crossness on the banks of the River Thames. 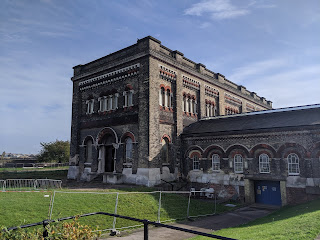 The Crossness Pumping Station is a former sewage pumping station designed by the Metropolitan Board of Works's chief engineer Sir Joseph Bazalgette and architect Charles Henry Driver at the eastern end of the Southern Outfall Sewer.

It was built between 1859 and 1865 by William Webster, as part of Bazalgette's redevelopment of the London sewerage system, it features spectacular ornamental cast ironwork, and still contains four large beam engines. one of these has been restored to working condition. On Sunday this engine, named Prince Consort, was in steam. Interestingly the reason the four engines are still there is because the cost of dismantling them when they were no longer required in the 1950s was considered too high. Which was lucky for us six decades later. 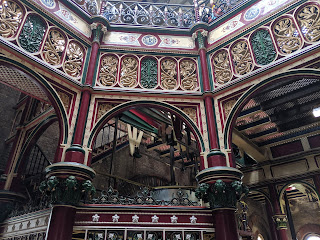 If you want to know the history of the works I suggest having a read of the Wikipedia Article which gives far more detail than I have space for here, however since 1987 the Crossness Engines Trust, a registered charity, has been overseeing the restoration of the site. They have a huge job on their hands frankly.

What was the boiler house now contains a museum with displays of information about the subject of London's sewage problems and solutions. Also quite a lot of "toilet exhibits". And a cafe and gift shop obviously, which always helps when trying to restore what is really a huge money pit! 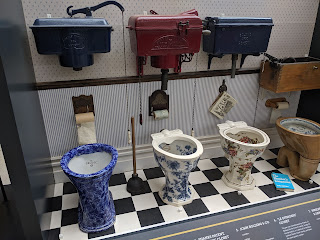 Surrounded by toilets it took me a minute to spot the signs for the actual conveniences, which are tucked away behind the cafe and rather disappointingly modern 🙂

Off the boiler house is the engine hall. This is a mandatory hard-hat area and volunteers are on hand to issue suitably sized titfers to visitors. (It was nice to see that they were cleaning and sanitizing them when they were handed back before reissue too.)
The engine hall is where the real action takes place. Nikolaus Pevsner described Crossness Pumping Station as "a masterpiece of engineering – a Victorian cathedral of ironwork". 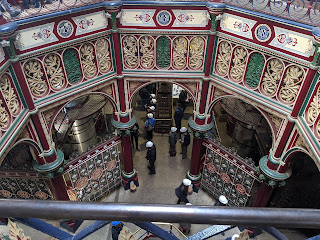 He wasn't wrong. As well as getting Prince Consort running a lot of work has gone into restoring the decorative ironwork. The Victorians didn't do plain and functional engineering. A nice humourous touch is that the capitals of the iron columns are decorated with fruit and leaves - figs and senna plants 😀

Even had the space not been busy with hard-hatted visitors and volunteers the scale of the steam engines (strictly speaking, steam pumps) means that it's impossible to adequately photograph them. From basement to upper deck they're three-storey behemoths of 19th century engineering. And yet when Prince Consort is running it's actually quieter than the crowd watching it. 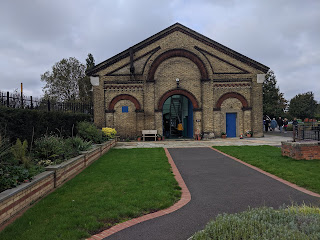 Outside the main building there are machine workshops and in the former Valve House a collection of smaller engines and pumps, some of which were also running albeit on compressed air as the works now only has a small boiler producing enough steam to run Prince Consort.

Once you've visited that you can take a scenic (depending on your definition of scenic) walk along the Thames Path. I wandered down as far as the pier that was used to bring in coal for the boilers and later to take away sludge for disposal at sea before that was outlawed in 1998. Oh and there's also the RANG Railway.

For a flavour of visiting Crossness watch:

And there are more photos too: 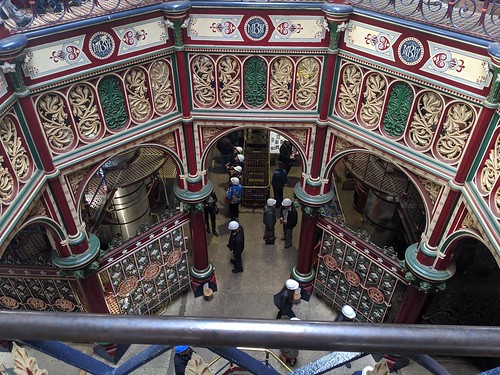 Posted by snaprails at 12:48 No comments: