Along the riverbank, the Isle of Dogs

The sudden unexpected reappearance of the sun 🌞 at the weekend what's more fuelled an urge to go out and explore. Camera at hand I headed for Wapping Station then turned right to walk east along Wapping High St. and Wapping Wall to find the Thames Path.

First stop the Prospect of Whitby for a swift one. A historic pub right on the river's edge, Greene King but OK really. There's a small outside area by the river but you probably have to get there early to bag a seat. Beer was good.

Thirst quenched, onward and eastward. Past the former Wapping Hydraulic Power Station and on to Shadwell Basin, built 1828-32 and although disused hasn't been filled in like some London docks and is used for leisure pursuits and is bordered by housing. The entrance from the River Thames is bridged by a bascule bridge, alas no longer operational but an impressive piece of engineering history.
Following the Thames Path into the King Edward VII Memorial Park you pass a circular brick building with ornate iron grilles in the windows. This is actually a ventilation shaft for the Rotherhithe road tunnel below. Alongside it is a memorial to 16th Century English navigators who set out from this part of the Thames to "explore the northern seas".


I continued on east along the Thames Path, through Limehouse, having to wait for the Narrow Street swing bridge to let a boat into Limehouse Basin and onto the Isle of Dogs. There are many modern apartment developments along this stretch of the riverbank, few of much interest but I did like this one with it's uppermost balconies reaching out to each other.

A little further on is a simple memorial plaque to the victims of the Bullivant's Wharf air raid shelter tragedy, the biggest wartime disaster on the Isle of Dogs but which I hadn't heard about previously. 40 dead and 60 injured when a public air raid shelter took a direct hit. Today our idiot Prime Minister decided to involve our country in another war 😞

Walking east or rather south at this point along the river you come to the old entrance, now blocked off, to Millwall Outer Dock.  Preserved here is part of the machinery that would have opened and closed the huge lock gates separating the docks from the open Thames.

Rounding the southern end of the Isle of Dogs past Masthouse Terrace Pier and the launching ramp for Brunel's SS Great Eastern you can see down the river to Greenwich, the masts of Cutty Sark towering over the surrounding buildings.

Nearby amongst the new apartment blocks are still some historic buildings. This was until 1986 the site of a colour factory, producing pigments and dyes. Allegedly the local bird-life would get into the factory buildings and become contaminated with the dyes: it was reputedly common to see pigeons in various unusual colours flying around the area.

Further along the Thames Path diverts inland along Ferry Street, a clue to the fact that there are no bridges this far east in London and until the late 19th and early 20th centuries, no other ways to cross the river. Another reminder being the Ferry House pub.

From Ferry Street the path goes behind the Poplar, Blackwall, and District Rowing Club, who seemed to be doing much carousing but no rowing today, and into Island Gardens park. Get a cuppa from the nice people in the Island Gardens Cafe and grab a riverside bench to take in the view of Greenwich across the river that inspired Canaletto.

The river traffic travels a bit faster now than in the 18th century though! 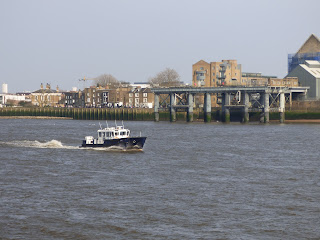 Island Gardens is the north terminal of the Greenwich Foot Tunnel, a quarter mile walk under the Thames brings you out amongst the thronging tourists around the Cutty Sark, where you can catch a river boat or look back across to the relatively peaceful Isle of Dogs.

From Greenwich it was time to take my aching feet to catch a train home. It was an interesting wander through an area with a long history which is still to be found if you look. Many more photos were taken along the way, the full set can be seen in this Flickr Album

Posted by snaprails at 22:45 No comments: