Almost like acting my age I paid an afternoon visit to this interesting NT property - trying to make the most of my NT membership for another year - on a day when the weather didn't want to make up its mind what to do and therefore somewhere with indoor and outdoor interest was required. 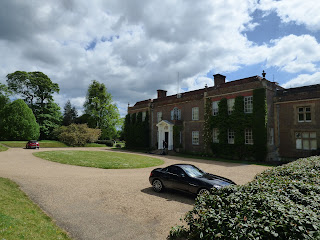 The house itself is now mostly Neo-Georgian, rebuilt in the early 20th century by then owner Ralph (rhymes with waif) Dutton from an earlier Victorian house adapted from a Georgian house built on the site of a Tudor manor house. Clear? Go here for the full history from the NT.

It got rebuilt again in the early 1960s after Ralph unwisely left an open fire burning in the grate in the library while he went for a post-lunch walk in the woods and came home to find the house he'd spent 15 years rebuilding in his preferred Regency style well and truly ablaze. 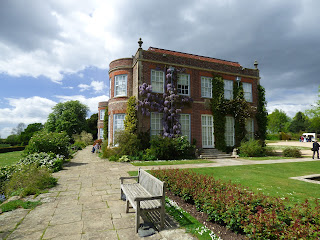 It only took 3 years to fix it up again, at the same time replacing the burnt  bits he didn't like (mostly Victorian) with more-to-his-liking Regency style.

Wouldn't get away with that nowadays I shouldn't think, the powers that be would insist on restoration to previous state even if that meant it didn't get done at all.

For reasons of preventing damage by UV light the interior of the house like most NT properties is kept in a state of semi-gloom and I didn't actually take any photos inside. I can tell you it's very nice if you like Regency/Georgian interiors and that Ralph liked stone ornaments, particularly porphyry, and intricate stone-topped tables. There's an Adam ceiling in the dining room of course, as every good Georgian house should have. And a lot of china and "paintings, classical, for country houses". 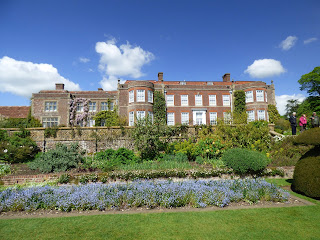 Outside the house sits in extensive formal gardens within a larger estate. Adjacent to the house is the cafe, in a surviving Tudor building and the church stands a little way from the house.

I got an ice-cream from the young, posh* girl in the converted horse trailer between the house and church and found a seat in the garden on which to enjoy it. At which point the 10% chance of rain became 100%.

(* posh enough to mention to the previous customer that she likes to ride her horse on the estate tracks.) 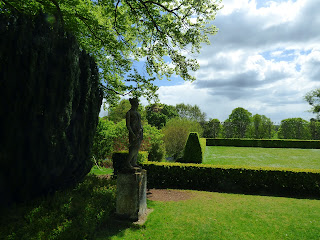 It was only a brief shower after which I explored the rest of the gardens - several statues and lots of topiary - took lots of photos (see link at bottom of article) and then decided the crowd in the cafe had thinned enough to risk getting tea and cake. The risk for the solo visitor being that you get your tea and cake and when you turn around a load of OAPs have come in and nicked all the free tables.

Plenty of free seats this time though. Decent cuppa too and they give you a pot of hot water to top up the teapot ✔ 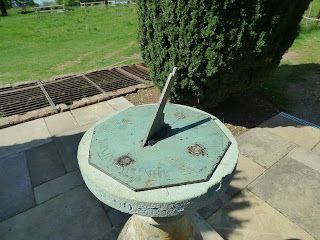 Earlier while walking through the garden I noticed that the sundial was about 40 minutes slow.

Checking my watch instead showed I had about an hour and a half left before closing time, plenty of time to follow one of the way-marked walks through the countryside of the surrounding estate.

I decided a couple of easy miles would do and picked the Stewkeley walk which according to the NT leaflet and map would allow me to "Enjoy a short stroll around our estate and see how well Hinton Ampner fits into the surrounding landscape". And the showers looked like they were done for now. 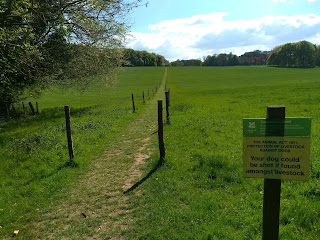 Turn right through the small gate just past the church and follow the red markers. Simples.

They weren't taking any chances of you losing the path across the pasture certainly.

If the worst happened the red markers gave an emergency phone number to call and a location number so that they could come and find you. 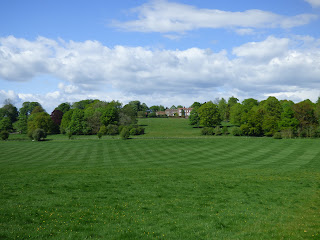 The walk headed south from the house in an anti-clockwise loop (although if you wanted to be daring you could do it backwards, the markers work both ways).

As promised you could see how the house fitted into the surrounding landscape, especially from the top of the hill opposite (only a gentle ascent).

Where the walk emerges onto a metalled country lane you could either turn left to follow the route or right to detour to explore the village of Kilmeston. I took the short detour. 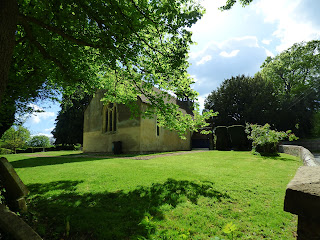 I didn't explore far but the bit of Kilmeston I saw consisted of a manor house hidden behind a high wall, a red telephone kiosk which no longer contains a payphone, a bus stop, and an 18th century church which didn't look that old from the outside, set in a neat yard with wide gravelled paths and all the gravestones re-sited to form a low wall along one side of the churchyard. And some expensive houses.

I retraced my steps and followed the way-marked route along the lane with one ear open for speeding Range Rovers as the lane is narrow with few refuge spots. As it happens the only traffic I encountered was, unsurprisingly, a solitary MAMIL. 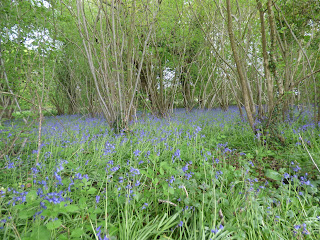 The walking route passes through an avenue of Beech trees and then turns off left onto an estate track back to the starting point near the house and church.

There's a bluebell wood to the right of the path shortly after where it leaves the road and this is the right time of year for Bluebells. There were some other walkers here who were quite excited about it. There again I'm spoilt by having a bluebell wood outside my back garden gate ☺
And back to Hinton Ampner, exiting through the gift shop (there's no other way out) without even the merest hint of temptation to buy anything and taking the shortest and most scenic route home avoiding any major roads or motorways. I remembered the way without the use of sat-nav, not bad since it's a couple of years at least since I last drove it.

I recommend Hinton Ampner for a pleasant afternoon, at least if the weather is on your side.

Posted by snaprails at 14:06 No comments: