In an Air Raid, Don't Stand and Stare at the Sky 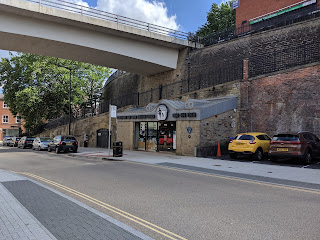 Take cover at once!

In Stockport near Manchester you could take cover in the public Air Raid Shelter carved out of the sandstone cliffs.

Now the Luftwaffe aren't (at least for now) making nightly visits to Greater Manchester but you can still take cover in the Stockport Air Raid Shelters because the council have opened them up as a museum. Also £5 per adult and accompanied U16s go free is more than reasonable.

In the reception area you get a short talk from a guide and then issued with a little audio guide. I must say this is one of the best, clearest, and easiest of these that I've come across at any visitor attraction. Eltham Palace take note. When you see a "target" on the wall present the device to it and off it goes with a brief talk related to that location.
First off though there's a short sound and light show in a darkened room about the building (or rather digging) of the shelter, followed by a brief air raid simulation. 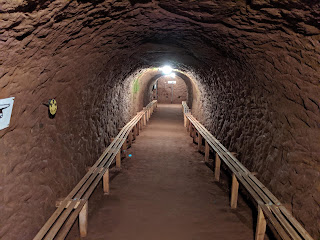 Then you're off on your self-guided tour aided by the audio device.

I'm not sure that the group I was with were paying much attention mind you as they soon disappeared ahead leaving me in peace to explore.

The shelter has displays in  various rooms, medical post, canteen, office, and of course the communal khazis.

The shelter is much bigger than the area that's currently open and lit for the public to visit. 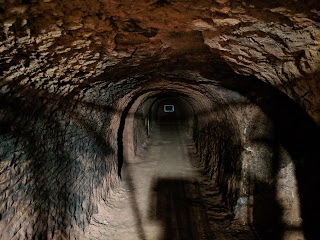 The unlit, fenced off bits, I believe are sometimes accessible on special tours.

This picture was  taken using the "night sight" mode on my Pixel 3a smartphone through the fencing and shows more than I could actually see as it was as my Mum would have said "as black as your Grandfather's" in there.

There are lots of information display panels to read if you want to, some of which you'll have to wipe the condensation off first, it's a good job they're made of something waterproof. Imagine how damp it would be down here with several thousand people sheltering from the bombing above. Here's some more pictures: 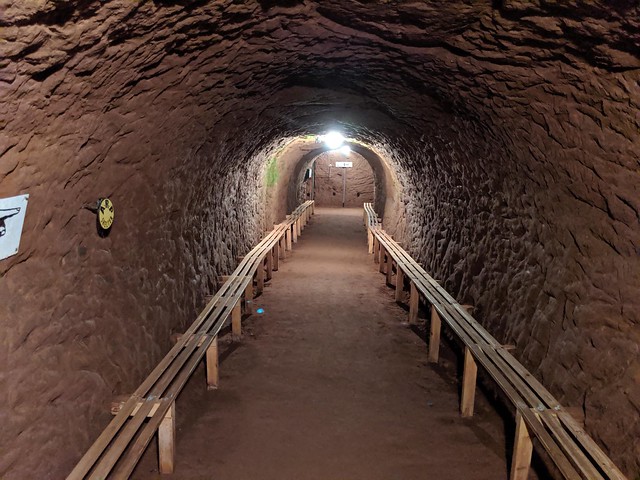 After the shelter I had a look around Stockport town centre. There was a big street market going on which was mostly selling street food of the sugary and/or fatty variety and having failed to find a fruit 'n' veg stall I resorted to lunch from Sainsbury's and a coffee from a cafe in a mostly shut down shopping mall.

Stockport town centre is otherwise nice with plenty of old buildings and on multiple levels. Most of the populace however, even those without their faces buried in smartphones, seem incapable of looking where they're going making it something of a cross between an obstacle course and the dodgems. There's an impressive market hall, holding some sort of craft fair but since charging to enter what is essentially a shop is taking the piss I didn't.

Back to the station and one of the frequent fast trains (it's on the main line} back to Manchester for one last night and a pint in a very empty Lass O' Gowrie. 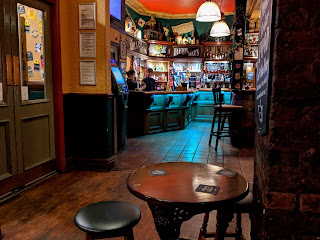